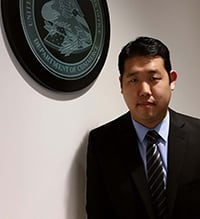 Lead Judge Michael W. Kim is a Lead Administrative Patent Judge in the Alexandria, Virginia headquarters of the USPTO. He is a graduate of Duke University School of Law, and holds a Bachelor of Science degree in Mechanical Engineering from Massachusetts Institute of Technology. Prior to his graduation from law school, Lead Judge Kim was a founding member of the Duke Law and Technology Review and served on the Student Judicial Review Board. Upon graduation, he served as a Patent Attorney at the law firm of Finnegan, Henderson, Farabow, Garrett & Dunner, LLP, before spending a year on a Presidential election campaign. In 2008, he joined the United States Patent and Trademark Office as a Patent Attorney for the Board, before he was appointed as an Administrative Patent Judge in 2011. Lead Judge Kim works on ex parte appeals, reexamination appeals, and AIA trials.