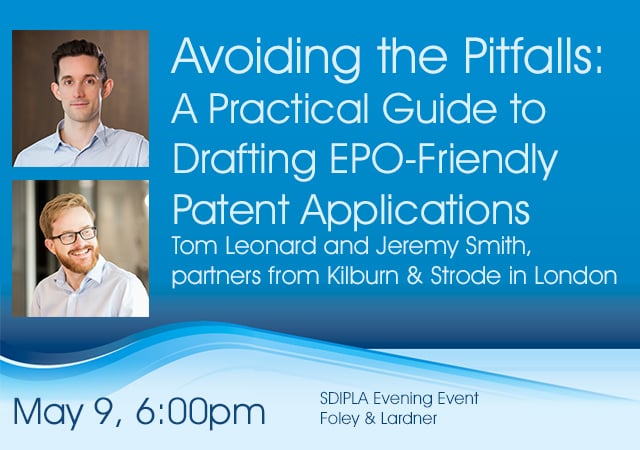 Join two experienced European patent attorneys as they give a practical guide to drafting patent applications ready for success at the EPO. Our speakers are Tom Leonard and Jeremy Smith, both partners from Kilburn & Strode in London. Tom’s practice is focused on life sciences, while Jeremy focuses on tech, so between them, they will cover issues relevant across the full range of technical areas. 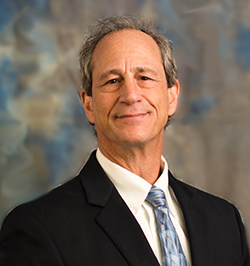 “I am very excited for the opportunity to return to the board of SDIPLA and help shape the events and agenda of the organization.  I served on the board about 15 years ago and I look forward to having another opportunity to serve the patent bar in San Diego, by lending my efforts to the other board members to attract interesting speakers and assist in hosting exciting and entertaining events for the SD Patent Bar. The board has been doing a really great job of providing such events and I will continue to contribute to keeping up the high standard that the current board has established.”

Brief Statement regarding my background:

I am a founding partner of the patent law firm of Jaquez Land Greenhaus LLP. The firm is a full-service IP firm with three partners, each having over 28 years of experience in all aspects of IP law, specializing in prosecution, licensing and litigation support related to electrical patents.

I was Vice President, Chief Patent Counsel at Entropic Communications, Inc, where I worked from Dec. of 2007 until joining forces with Marty Jaquez and John Land, my former associates at Spensley Horn. I have been an adjunct professor with Thomas Jefferson School of Law (TJLS). At TJLS, I taught patent law classes on claim drafting, litigation, and claim interpretation.

I was Co-Chair of the CommNexus Intellectual Property Special Interest Group (IP SIG) and a member of the San Diego Intellectual Property Law Association (SDIPLA). I am a past president of the SDIPLA, where I spent five years on the Board. In addition to serving as President, I served as Vice President, Secretary, and Treasurer, performing each position for one year.

I was formerly with Qualcomm for 10 years, the last five as Vice President, Patent Counsel. I have been practicing patent law in San Diego since 1991 as an associate with the law firm of Spensley Horn Jubas & Lubitz and then in 1995, with the firm of Baker, Maxham, Jester, & Meador.

My career experience also includes working as an Electrical Engineer. I graduated from the State University of New York at Stony Brook in 1983 with a Bachelor’s of Electrical Engineering degree. During my senior year, I worked full time designing circuits for detection of failures and redundancy switching in satellite earth station equipment. After graduating, I spent another six years designing phase lock loops and filters for receivers, synthesizers, aircraft transponders, secondary radar, and equipment used to receive and transmit radio frequency signals between satellites and satellite earth stations. In my last engineering job, I was project engineer for Satellite Transmission Systems, a subsidiary of California Microwave, responsible for leading an engineering team that designed and installed one of the largest satellite earth stations in Europe (London Teleport II).

I subsequently attended Hofstra University School of Law while working as a consultant for Satellite Transmission Systems. During law school, I was an author for, and Editor of, the Hofstra Property Law Journal. I authored an article that was cited by Chism on Patents, which is the leading treatise on patent law. I was also awarded the “Gina Maria Escarce Memorial Award” for “contributing to the understanding of complex legal issues.”

I served as a Board Member on the Board of Directors for the San Diego Volunteer Lawyer Program for seven years, a program that is dedicated to assisting people in gaining legal system access, including battered women, children, elderly, immigrants, and others in need of legal services.