Please join us for an engaging presentation of topics of current interest from the USPTO, including trends, initiatives, and future plans. 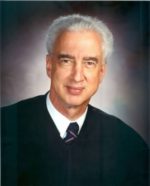 Chief Judge Michel was appointed to the United States Court of Appeals for the Federal Circuit in 1988 by President Ronald Reagan. In 2004 he assumed the duties of Chief Judge. In 2010, Chief Judge Michel stepped down from the bench after serving more than 22 years on the court.

In his years on the bench, Chief Judge Michel judged thousands of appeals and wrote hundreds of opinions in patent cases. Prior to his appointment to the bench, Judge Michel was assistant district attorney in the Office of the Deputy District Attorney for Investigations in Philadelphia from 1966-74, as well as a Second Lieutenant in the United States Army Reserve from 1966-72. From 1974-75, he was the Assistant Watergate Special Prosecutor, and from 1975-76 he was assistant counsel to the United States Senate Select Committee on Intelligence. He then became the deputy chief and Koreagate prosecutor for the Public Integrity Section of the United States Department of Justice from 1976-88. He was the associate deputy U.S. attorney general in 1978, and in 1981 became counsel and administrative assistant to U.S. Senator Arlen Specter until his judicial appointment. He has served as adjunct faculty at several institutions of higher education including the George Washington University Law School and John Marshall Law School. In 2012 he joined the Intellectual Property Advisory Council at the University Of Akron School Of Law.

Chief Judge Michel has been the recipient of numerous awards including the Jefferson Medal, the Frederico Award, the Katz-Kiley Prize, the Eli Whitney Prize, the Sedona Conference® Lifetime Achievement Award, and awards by the ABA Section of Intellectual Property, AIPLA, IPO, the Linn Intellectual Property American Inn of Court, and other leading organizations. He was named one of the 50 most influential leaders in intellectual property in the world by Managing Intellectual Property magazine and inducted into Intellectual Asset Management magazine’s International Hall of Fame. A frequent speaker on IP subjects, he has also testified before Congress on patent reform legislation and has served as Special Advisor to the Patent Reform Task Force.

Chief Judge Michel earned his B.A. from Williams College in 1963and his J.D. from the University of Virginia in 1966