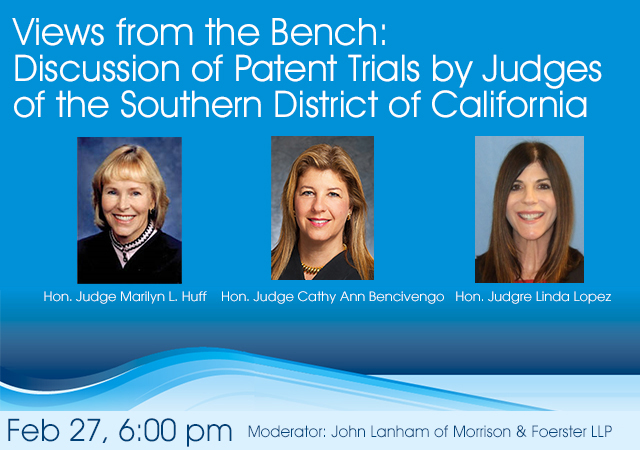 Views from the Bench: Discussion of Patent Trials by Judges of the Southern District of California

Buffet will be served.

Before joining the bench, Judge Bencivengo was a partner with the law firm of DLA Piper (formerly Gray Cary), where she specialized in intellectual property litigation and was National Co-Chair of the firm’s Patent Litigation Practice Group. Judge Bencivengo attended Rutgers University in New Jersey, earning a B.A. in journalism and political science and an M.A. in political science as a Fellow at the Eagleton Institute of Politics. She received her J.D. from the University of Michigan Law School, magna cum laude. She is a Master in the J. Clifford Wallace Chapter and the Louis M. Welsh Chapter of the American Inns of Court. She currently serves on the Ninth Circuit Education Committee and formerly served on the U.S. Magistrate Judges Education Committee for the Ninth Circuit, chairing the committee in 2009 and 2010. She was a Ninth Circuit Director of the Federal Magistrate Judges Association, served on the Advisory Board of the San Diego Chapter of the Federal Bar Association from 2009-2012, and is a member of the Board of Governors of the San Diego Chapter of the Association of Business Trial Lawyers.

Judge Lopez is an active member of the legal community. She was selected to be a Lawyer Representative for the Southern District of California from 2014 until her appointment to the bench and has served as its Chair and Co-Chair. She is also a Master of the Welsh Inn of Court and serves on the Board of Directors of the San Diego Chapter of the Federal Bar Association. While practicing in Florida, Judge Lopez served on the Board of Directors for the Florida Bar Association.

Judge Lopez enjoys volunteering in the community.  She was the liaison for community outreach while at Federal Defenders, and regularly participates in the Open Doors to Federal Courts program. In addition, she volunteers in programs geared toward educating students about the judicial system and constitutional law. Judge Lopez assists in the preparation for, and presentation of mock trials for students of all ages, and is a member of a reading program at a downtown elementary school.  Judge Lopez was recently honored with a Service Award from the U.S. District Court for the Southern District of California in recognition of her dedicated service and leadership in community engagement.