Kurt Kjelland has known Susan Finch, the founder of Binky Patrol, Inc. since 1977.  As they reconnected through Facebook and the new SDIPLA website, he got to know her outside passions and learned about Binky Patrol. This 501c3 was started in 1996 with four volunteers who wanted a way to make a difference through making blankets or volunteering without a set schedule. 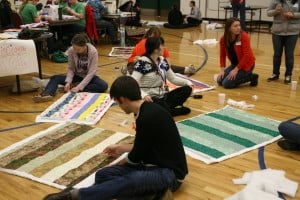 The original members were all full-time business owners and could not make training schedules required by a local battered women’s shelter, Human Options. There had to be a way to help. Susan Finch was inspired by her mother’s desire to make blankets for unwed mothers. Finch who hadn’t sewn since 7th grade decided to contact the picture framers she used at her Laguna Beach art gallery. They gladly donated fabric scraps. Local clothing manufacturers True Grit, BB Dakota and other contributed.

She put a sign up sheet out front and a month later she and her new friends made their first delivery to Human Options Battered Women’s shelter before Binky Patrol gained national exposure on the Oprah Winfrey show. The organization went national that same day.

Since 1996 Binky Patrol has delivered over 750, 000 blankets to children and teens in need of comfort across the country. They have inspired groups in other countries to host blanket making events and create chapters that serve the people in their villages and cities. Currently there are over 100 active chapters of Binky Patrol. Finch has VERY few rules: